Message in a Bottle

Message in a bottle was a 2 person group final project for our Physical Computing class. It was presented as a temporary 1 day exhibit at the Pittsburgh Children’s Museum. Our concept was to create a mobile interactive experience where children could listen to messages left by previous children and then record messages for future children. We wanted to create an experience that seemed magical, was engaging, and highlighted communication and social connectivity, which in the end I think we achieved.

From the beginning we knew we wanted to have multiple physical jars that you spoke into. What we were unsure of was how we wanted the jars displayed/ mounted. In some of our early designs we had the jars permanently mounted in different sorts of large frame structures, but we quickly moved away from this for several reasons. First we discovered that kids are extremely tactile and love holding things. this led us to iterating our design so that each jar would be fully self contained so that kids could pick them up. The second reason we moved away from large static frames for holding our jars was that we thought it would be much more interesting if our jars could travel around the museum delivering messages to children in different areas.

It turned out that our 2 biggest challenges on the project resulted from the switch from static mounted jars in a frame to fully self contained jars. With all the jars mounted together it meant we could have had centralized control, wiring, and power. But with fully self contained jars we would have to have a full set of components for each jar. Additionally it meant we would need to fit all of those components into each jar.

Our final design for the jars consisted of a laser cut internal acrylic structure that had mounted to it an Arduino Uno which acted as the brain, 1 Adafruit Neo-Pixel RGBW ring, 1 no-name audio  recording, storage, and playback board, 1 micro class D amplifier, 2 three watt 8 OHM mini speakers, 1 micro switch for triggering the jar, and 2 three cell AA battery holders to power everything.

To accomplish our idea of having the jars be mobile and so that we could bring them around the museum we decided to go for a sort of futuristic science related equipment cart that was filled with “magic sand” that gave the jars there powers. This made it easy for us to navigate the museum with our project. Overall the project was a big success as children really seemed to be intrigued by it and  enjoyed engaging with it. 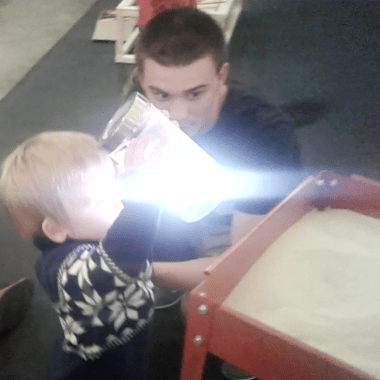